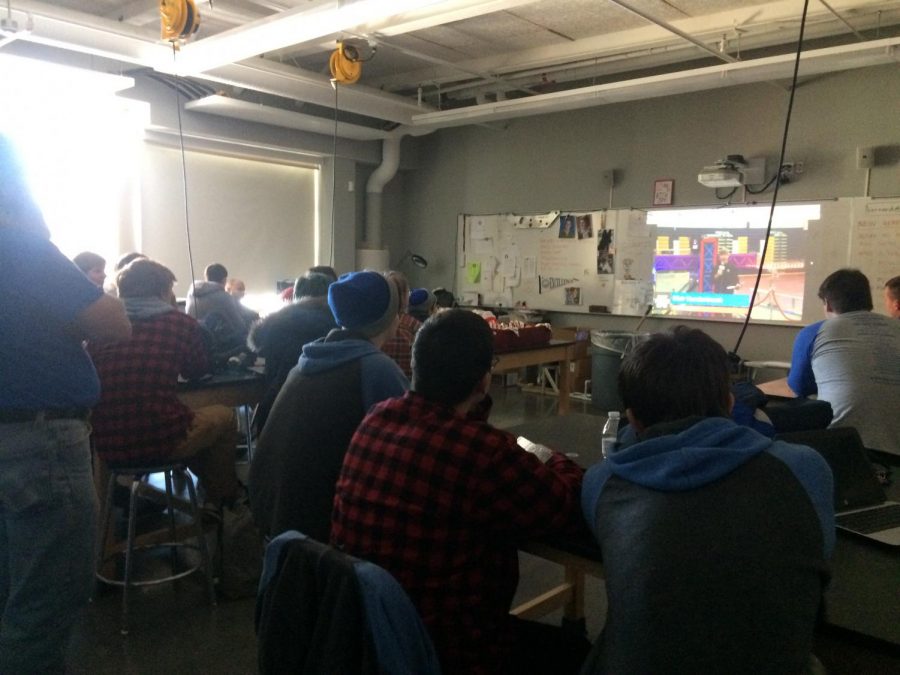 Members of the Robotics team watch this year's kickoff livestream

One of the many clubs here at West Side is the Robotics Club, a successful team made up of enthusiastic people. The team was greatly anticipating this year’s challenge.  The 2018 Robot challenge was revealed on January 6th through a worldwide livestream. Later in the year, they will compete in two competitions. The first is March 16th-18th, and the next is April 6th-8th.

Team members and mentors enjoy robotics for many different reasons. Rob Szmania, a mentor, was on the team when he was in high school and wanted to pass on knowledge to future team members because of his mentors. Jackie Herbert-Garcia, a sophomore, has a reason to become a ‘smurf’ every year by dressing up and showing team spirit, as the team’s colors are blue and grey.

Of course, the jobs in the Robotics Club don’t just include building the robot. Other positions that people have are advertising, business, coding and CADing. Coding is used to communicate with the robot and control it, whereas CADing (Computer Aided Design) allows the team to look up 3D designs online so that they don’t always have to come up with them from scratch.  They can also add to what they already have. Then, they use their designs to build things in real life.

Last year, the team came in third at the competition in Redding, Massachusetts. They are looking forward to doing well this year, also, by ranking high in competitions and gaining new allies with other teams.

During the challenge, the robot is controlled remotely by a team member as it delivers ‘power cubes’ in certain locations on the field to take control of those areas. One of these locations is a scale, which the robot drops the power cube onto in order to control that location. The team gets points for every second that they control an area with their power cube.

The team wants to build a robot that can move without being directly controlled in autonomous mode. Their main goal is to get their power cube to the scale within the fifteen seconds allotted for autonomous mode. During the next ninety seconds, they want to continue to put blocks onto the scale to keep it under their alliance’s control. During the last thirty seconds of the match, the team will attempt to climb a bar that is seven feet off the ground so that their robot is above the marked line, so they can score points. They are ambitiously planning and designing the robot so that it will be able to lift either one or both of their teammates’ robots. This would grant the team points towards winning the match and ranking points if these goals are achieved.

The robotics team is very enthused about this year’s build season and are looking forward to their first competition.