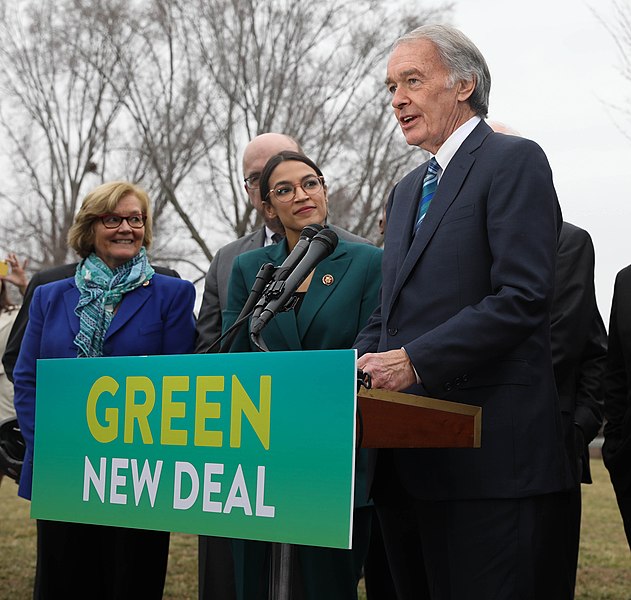 The prospect of coastal cities underwater, blistering heat killing animals and people, and fish being suffocated from plastic in the ocean has made global warming a relevant and urgent conversation. According to an October 2018 report by the United Nations, if no action is taken by 2030, sea levels will rise four inches when the West Antarctic ice sheet melts. The ocean would then continuously absorb the sun’s heat without any ice to reflect it. Almost all the coral reefs will die and hundreds of millions of people will perish due to the intense heat. Furthermore, Democrats have recently brought a proposal to the table to combat climate change, and it’s called the Green New Deal. “The United States a big part of the problem and we need to be a big part of the solution,” said junior Nate Lapointe.

On February 7, 2019, Representative Alexandria Ocasio-Cortez and Senator Edward Markey of Massachusetts introduced a fourteen-page Green New Deal resolution to the House and Senate. The Green New Deal resolution is a non-binding set of ideas and goals that ensure solutions to climate change; it’s not a bill yet. It calls for the world to get to net-zero emissions by 2050; that means the amount of carbon used has to be equal to the amount released. It wants the United States to be a leader in helping achieve that goal. However, the Green New Deal resolution is not only about saving the planet, but its guidelines also work towards economic and social prosperity for the nation. It states the need to have universal healthcare since America has the most expensive healthcare in the world. The Green New Deal will additionally make clean air and water a human right. It also calls for a minimum wage that could cover the cost of living, according to a February report from The Balance.

“This is going to be the New Deal, the Great Society, the moon shot, the Civil Rights Movement of our generation,” stated Alexandria Ocasio Cortez, referring to President Franklin Roosevelt’s Great Depression reforms, and President Lyndon Johnson’s social reforms in the 1960s. According to the resolution, the Green New Deal calls for WWII scale national mobilization to halt climate change. To achieve this the resolution says that within the next ten years the country must work towards 100% renewable energy. It suggests a national “smart” electrical grid and the reworking of all buildings in the country to be energy efficient. This proposal would transform society.

These goals prioritize creating “green” technology, industries and products that could become major American exports. Immense changes in the nation’s infrastructure would include the establishment of high-speed public rails and the elimination of emissions vehicles, which would include automobiles that rely on gasoline and diesel. The Green New Deal would fund for new jobs like installing solar panels, manufacturing a whole new generation of zero-emission vehicles and transforming the infrastructure of the nation to be energy renewable. Experts say, according to Competitive Enterprise Institute that the Green New Deal’s demand on the electric grid system would cause our current system to become unstable. In other terms, the house would be running faster than the cart can handle.

Although this resolution has gained support because it could combat climate change and create an economic boost, it has received a lot of backlashes. The trillions of dollars studies have shown it will cost, lead the argument that the bill is unrealistic. Others say that the cost alone would cause a second Great Depression. Most Republicans oppose it and many have made it clear, including President Trump. “I really don’t like their policy of taking away your car, of taking away your airplane rights, of ‘let’s hop a train to California,’ of you’re not allowed to own cows anymore!” Trump tweeted according to CNBC. This, however, isn’t true. To reduce methane, a greenhouse gas that livestock releases, the Green New Deal says that the United States government must work with farmers to eliminate greenhouse gases as far as technology is concerned. It also looks for new ways to transform American travel in a “green” manner. It doesn’t call for taking away cows or taking away airplane rights.

As far as cost is concerned, there is no exact price tag yet. President Trump has said it will cost $100 trillion, and supporters say that global warming could be equally expensive to the economy. “You also have to calculate the catastrophic economic impact of increased natural disasters and sea level rise. If we can avoid that with these new measures, it’ll pay off in the end,” said junior Sophie Coyne. According to the New York Times, Vermont has a goal of achieving 90% renewable energy in the state by 2050, and it will cost the state $33 billion. At the same time, the state has seen job growth in green industries which will help save money in time. According to Electric Power Research Institute, making a smart energy grid would cost $476 billion, but make $2 trillion in the end.

The youth-based Sunrise Movement are key activists of the proposal. According to a 2019 New York Times article, they laid out a strategy and protested by hosting a sit-in outside of Speaker of the House Nancy Pelosi’s office. “I think it’s interesting to see that the urgency is generational. Those that will be here to see it – it’s very urgent. Those who won’t be here – it’s not,” said Dan Kelly, Chair of the West Springfield Democratic Committee. Democratic presidential candidates like Kamala Harris, Elizabeth Warren, and Bernie Sanders are all co-sponsors of the Green New Deal based on a CNN report.

On March 26, 2019, the Senate voted against the Green New Deal resolution, even though it wasn’t a piece of legislation. Senate Majority Mitch McConnell pushed Senators to vote on the resolution for the purpose of gauging support among lawmakers. Supporters of the Green New Deal like the Sunrise Movement were happy to see that Democrats kept a united front and only three voted against it. “The Green New Deal has definitely shifted the discussion. The conversation has gone from ‘Oh should we do this little carbon trading program?’ to ‘Should we have large scale economic changes within the country?’” said junior Nate Lapointe. The Green New Deal has presented solutions to global warming and may become a leading factor in future political and economic conversations.