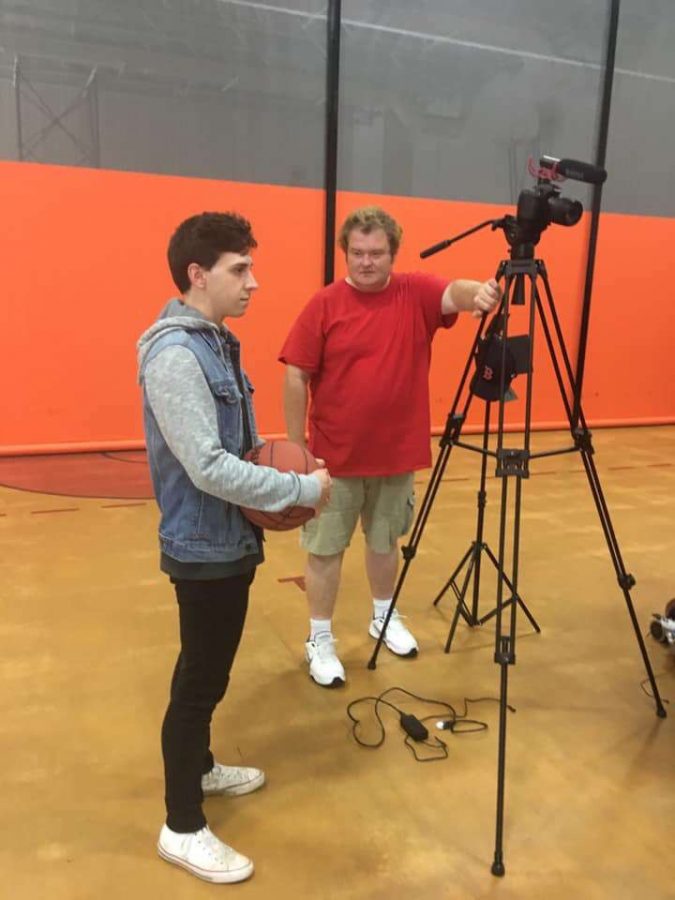 In April of 2016, West Side Alum Jack Jonah accidentally overdosed at 19 years old. He was a borderline artistic genius, and his paintings still hang on the Jonah family’s walls. He also played the piano, guitar, and even wrote a play about bullying. Jack had a love for people, and animals too. He worked as a Medical Technician at Boston Road Animal Hospital. His death left many feeling lost and devastated, especially his mother Debra, his father Kirk, and his siblings Karlye and Dan. Mr. Kirk Jonah created a non-profit organization in Jack’s name that works to honor, educate and support those affected by the opioid crisis. This summer, three years after his passing, a movie was created about Jack Jonah. The community, actors from across the country and students from West Side all came together for a common purpose – “making courage contagious” – in Jack’s memory.

On May 4th 2019, the Jack Jonah Foundation had a walk at Ashley Reservoir, one of Jack’s favorite places, and over a thousand people showed up. At the walk, they honored fifteen people, young and old, who were victims of the opioid crisis and their families. Kirk Jonah was approached by Michael Tourville, a good friend and author of A Promise to Astrid, after Jack’s Walk. Torville’s book was made into a movie by Jason Campbell, a faith-based movie director from West Virginia. Tourville explained to Jonah that Campbell has been longing to create a movie covering the opioid crisis, and discovered Jonah’s story through a friend.

The Jonah family contemplated if they could handle making a movie about the nightmare they went through and the unbearable sadness it left them with. “It’s so shattering that it usually destroys a family, and I’ve done everything I can to keep this family together,” Mr. Jonah said. The Jonah’s are very family-oriented and do everything together. They realized the movie was to be bigger than themselves, and it would be a way to educate the public and bring awareness to the opioid crisis – which is one of the Foundation’s goals.

Jason Campbell, Michael Tourville, and Kirk Jonah, who was the executive producer, all collaborated in the making of the script for two months. Campbell would call Karlye, Jack’s sister, for input a lot; she was Jack’s best friend and was a source for a lot of information. Mrs. Svec, WSHS Drama Club Advisor and English teacher, said, “I was so nervous when I heard they were doing it. I was afraid it might ruin Jack’s memory or not respect him as a person. I didn’t know his dad and family were involved. Once I looked into it, I was really pleased. Jack is really Jack in the film, as I remember him. I had already made peace with myself about Jack, but it was good to see his family together and healing.”

The movie covers the day of Jack’s passing and the aftermath. It unravels into many true stories of addicts, whether they’re in recovery or have passed. Jack is involved within all of these stories in some way. The Jack Jonah movie is very faith focused, as it includes many angels of people who were victims of the opioid crisis. “Making courage contagious is the theme of the movie. Have the strength and courage to make the right decision and have the strength and courage to speak up if you know someone is struggling with addition,” said Mr. Jonah. He continued, “These are good kids. They just made a mistake somewhere.”

Auditions took place on July 20th at West Springfield High School. Everyone who showed up received a part, experienced or not, because many extras were needed. Many lead parts were already finalized by Director Campbell. Dean Cain, who plays a police officer dealing with the opioid crisis, appeared in the 1993 television show Louis and Clark as Superman. Actress Kathy Sanders plays Mrs. Debra Jonah and Michael Sigler, who’s acted in many films such as Riverment, The Lost Within, and Choices, plays Mr. Kirk Jonah.

At the audition, the producers were looking for people to fill the main roles of Jack and his two siblings Karlye and Dan. Braxton Michael, who graduated from the American Academy of Dramatic Arts in LA in 2018, received the lead role as Jack Jonah. Jack’s older brother Dan is played by Jonah Robinson, who went to school in Chicago for Musical Theatre and played in Moondance in 2019.

Many students from West Side went to the audition to participate in the movie. Juniors Bri Dexter, Gillian Gray, and Avery MacGrath all played a part in the film. Along with Sam Hartman, a senior. All of the girls were angels in the film, however, Gillian also played a character named Grace. Briana Dexter was one of the angels in the film who had a short scene about how her character died when she overdosed. With family who has struggled with addiction, Dexter took part in the film to educate the public about the tragedy and danger of the opioid crisis. She said, “A lot of the scenes were very hard to perform. Everyone on the set was very sweet and very understanding and very loving.” Chris Demerski who graduated in 2018 and Faythe Renee who graduated in the Class of 2019 from WSHS also were in the film. Demerski played a character named Rory who was a high school student.

Karlye Jonah is the youngest of the siblings, she’s 20 years old and is a nutrition major at Holyoke Community. She was watching the auditions, and at the last minute ended up auditioning as herself. The directors and producers were in awe at her performances and gave her the part. Karlye Jonah has been a dancer for years, and goes to Hackworth School of Performing Arts in Easthampton. Her dancing career played a role in her ability to seamlessly perform in front of the camera. As an actress, she then had to relive the most heartbreaking time of her life. The experienced actors taught her to keep her emotions in check and think of the big picture – this is for Jack, not her, and she’s saving lives. Campbell, and many of the lead actors and actresses were in awe of Karlye’s skills. Now, she’s flying down to West Virginia to shoot another movie. She wants to be an actress now.

Filming started soon after Mr. Kirk Jonah appeared on Fox and Friends with Dean Cain on August 11th and continued until the end of the month. They’d film from dawn to dusk everyday. Some actors like Dean Cain would fly in and shoot all of their scenes and then fly out two days later. Others stayed in the Jonah’s and their neighbors house for the duration. Lead actors like Kathy Sanders who plays Mrs. Jonah and Michael Sigler who plays Mr. Jonah spent a lot of time getting to know the family, and the people they were acting as. The process was a two-week whirlwind of filming, laughing, and crying. “This movie was an incredible experience where I was able to meet amazing people and learn a little bit of what it’s like to struggle with the loss from opioid addiction,” said Gillian Gray, a junior.

The movie taught students from West Side how much goes into the process of creating a movie. Demerski, Class of 2018, stated, “Personally from doing this film I got a ton of experience in how cameras work how the scene is created and produced. Along with being an actor I was the Production assistant so I watched a lot of what was happening and learned how everything works and came together.” Makeup, costumes, lighting, angles are all important aspects of making a movie. Avery MacGrath was the wardrobe director, so actors would go seek her advice on what they should be wearing. Junior Briana Dexter explained that she now has a lot more respect for everyone who works behind the scenes because although she’s been in the Drama Club for a while and she’s learned so much about acting, they aren’t exposed to professional filming.

Throughout the two weeks, everyone got very attached with one another. They would go through shooting 10-20 takes of very emotional scenes and often the actors would be drained. “It was powerful. It was moving. It was supportive. We grew together. We loved each other. We believe that there’s a bigger purpose here – that we’re going to educate the communities and youth. We’d finish up the day and think ‘this is going to save lives. This is what Jack would want’,” Mr. Kirk Jonah said.

Many local places were used in the process of filming. Many scenes are shot at the Jonah family’s house and their neighbor’s house in West Springfield. They spent time shooting at Agawam Middle School, Partners Restaurant in Agawam, Ashley Reservoir, the basement of the old paper mill Southworth Co, Agawam Library, Mittineague United Methodist Church and Community Preschool, and the Springfield Country Club.

The team’s goal is to push the finished Jack Jonah movie out by early November. It will tour the United States with showings in churches that can sit around 1500 to 2000 people. Mr. Jonah and Dean Cain will speak briefly after the movie is shown to the audience. The movie will probably make it to Sony or Netflix for streaming afterwards. Mrs. Svec explained what she hopes the film will teach people: “Well, the obvious; drugs destroy the lives of many, not just the user. Many people are negatively impacted by drug use. Addiction is ugly, painful and empty and drugs are not a joyride and that life is precious. I think it shows that healing is possible. Jack’s death impacted so many. I hope it helps them to heal.”

Although the movie was an emotionally challenging experience, Mr. Jonah said that it brought his family further along the path of healing. He continued, “Don’t make your sadness all day long make it a part of your day. I created this imaginary vault. I’m the only one that has the key. And everyday I open it up and I take the sadness out. And it’s overwhelming. It breaks your heart. It could be ten minutes or fifty minutes. Then I put the sadness back in the vault and lock it up.” In Jack’s memory, the Jack Jonah Foundation works to honor those who have been victims of addition and their families, educate the public on the opioid crisis, and support those addicted and their families.