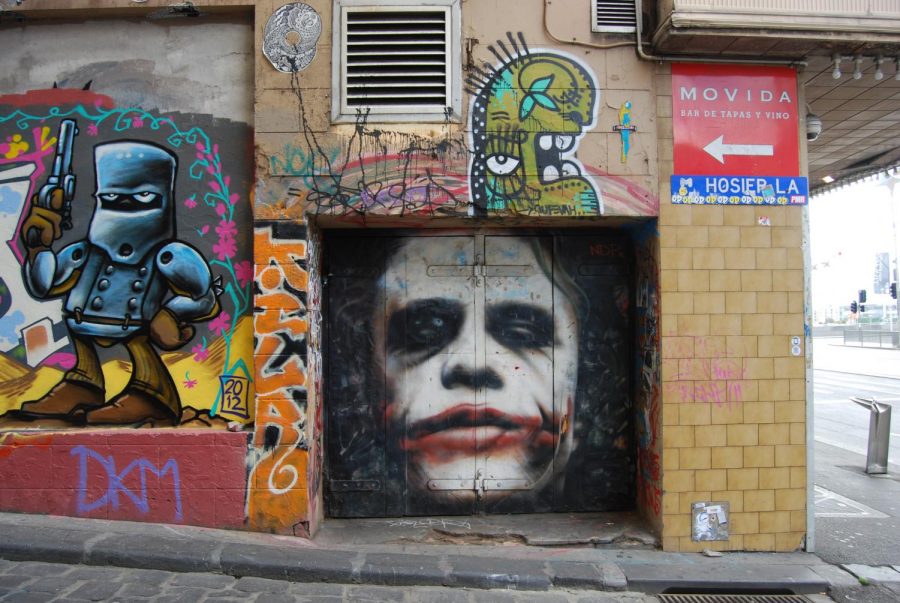 Street art of the Joker in Melbourne, Australia

The lengths actors go to portray their character is unhealthy to their well being, but crucial for their success. Individuals who play the Joker provide a great example through executing their physical and mental alterations. The Joker is a supervillain created by Bill Finger, Bob Kane, and Jerry Robinson. Debuted in the comic book Batman on April 23, 1940, the Joker resembles a distorted, sadistic, and intelligent mastermind. The individuals who mirror the Joker often suffer permanent mental fallacies, causing these entertainers to perform negatively in their daily life.

Heath Ledger, an Australian actor who played the Joker in The Dark Knight, began experiencing his first wave of instability in 2008. Before filming, Ledger locked himself in a hotel room for six weeks, in hopes of truly embodying his character. Along with enacting psychological behavior, during the filming process, Ledger would do several extensive techniques to get into character. For example, he would repeatedly slam his head into the walls of the set, leaving marks and dents in the tiles. According to Christian Bale, an English actor who played Batman in the movie, Ledger would also encourage him to forcefully hit him so it looked more realistic, even after countless reassurances that it would look the same. This film pleasantly surprised critics and provided a glimpse into Ledger’s talent before his passing.

Another attempt at the Joker was displayed on August 5, 2016. Jared Leto, starred as one of the “protagonists” in Suicide Squad, which enabled him to act upon his darkest desires. According to ScreenRant, Leto had several meetings with individuals who were enlisted in psych wards. Leto begins, “people who have committed horrendous crimes… people who have been institutionalized for great periods of time.” Along with visiting admitted patients, he would spend nights locked in jail cells. Adam Beach, an actor portraying Slipknot in the film, told E! News, “Leto sent a nice love letter with a black box with a rat in it- a live rat.” This odd behavior shown through Leto’s tactic didn’t end there. Beach continued, “he also sent bullets to Will Smith with a letter,” followed by a message to the whole cast which included the carcass of a dead hog. This hog-head was plopped on the table at the beginning of a scene by Leto’s hired henchmen. Although he hasn’t commented on this twisted gift, he has admitted to, “having fun, playing those psychological games.” This movie was a disappointment to many, due to the surplus of protagonists spoiling the plot.

On October 4, 2019, the most recent Joker movie debuted. Joaquin Phoenix, an American actor who played the Joker in the 2019 revival, produced many controversies among his audience. Before filming The Joker, Phoenix was told that he was supposed to resemble a malnourished and thin person. In response, Phoenix dedicated himself to a strict diet consisting of apples, lettuce, and steamed green beans. Phoenix explains, “it’s a horrible, brutal diet but you get all the vitamins and minerals, so you’re safe. It’s grotesque.” He lost a total of 52 pounds. Phoenix also strived for an “almost painful laugh” throughout the filming process, after reserving an appreciation for the metamorphosis of his character. Along with other strenuous strategies, Joaquin Phoenix resembles the behavior of the “Jokers” before him, and raises the concern for pure instability. Although this feature created controversy, the general response was neutral. Many people appreciated the authenticity of the film, while others wanted more action.

The actors who play the Joker go to extreme lengths to get into character, often putting themselves or others in danger. DC fans are waiting in suspense for the progression of the Joker, along with the actors who played him.