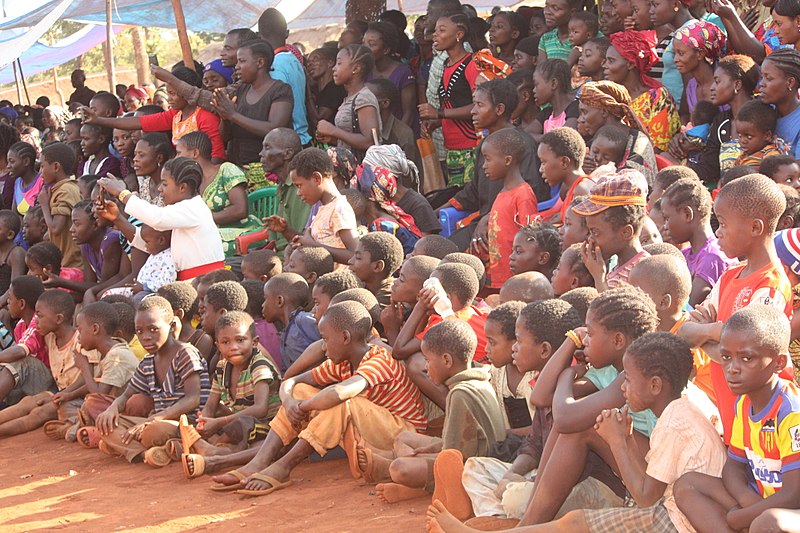 Children sit together at the Nyarugusu Camp in Tanzania, where Beliya Makala grew up.

Freshwater, stoves, food, clothes, and heat are all necessities the average American possesses; however, these are things that many of those living in third world countries struggle every day just to find. Beliya Makala, a sophomore at West Springfield High School, was born and raised in Tanzania. She and her siblings would wake up in the early hours of the morning to walk to a stream, or a well to collect water for their family. “We’d get up early to collect water because if you were last in line, you might go home without water,” she said.

Makala’s parents moved from their home country, the Congo, to a refugee camp called Nyarugusu in Tanzania in 1996. Nyarugusu is one of the largest refugee camps in the world, with around 150,000 refugees. Her mother gave birth to 12 babies; however, three of Makala’s siblings died young. Her father left the family when Makala was six-years-old. Growing up, her mother had to take care of nine children, and eventually six when the eldest moved out and got married. Makala’s mother would sell everything she could to find food and clothes for her children. Beliya Makala recalled all the times she helped her mother struggle to find money, and said “Sometimes I look at my mother and I just want to cry. She always put her children before herself, she does everything for us.”

Her home was made of raw materials, and they only had cots to sleep on inside of it; her parents built it when they moved to Nyarugusu. Cooking was done over a fire pit, and they had to collect and cut wood. When they collected food from the gardens and went into the forest, they were in danger of being bitten by snakes or attacked by animals. In her camp in Tanzania, students would walk from classroom to classroom like on a college campus. There was no security, and no technology and teachers would just use books and a chalkboard. She recalls not learning much in class and learning some French, a common language used in this region. It was up to students to show up and learn, and teachers didn’t follow up with attendance.

In 2016, her family began their 7400-mile flight to move to the United States. Soon after they arrived, Makala entered 6th grade at West Springfield Middle School. It was a culture shock. She felt so alone when they arrived, it took a while for them to realize there were many people from Tanzania in the area. The family had no idea how to turn on the stove, use the microwave or sink. It took a friend of their family from Tanzania who also immigrated to show them how to use modern household utilities. In school, she was surprised that everything was inside, and the amount of technology used in the classroom. Her native language is Swahili, which no one else spoke in school besides her siblings. “I felt so alone. I was dying, I didn’t know what to say,” Beliya Makala said. She took about two years to pick up English and to communicate with students.

Makala arrived in the United States in the winter. She’d never seen snow before in her life. Weather in Tanzania is very hot and humid, but they do have a wet season. Besides the cold, it was hard to get used to the safety measures one has to take in this country. In her camp, her siblings and she could go wherever they wanted and not worry. Here, they were scared to leave the house, and even today she worries just going outside alone. It’s hard for her to trust people here since it’s a completely foreign environment compared to where she grew up.

When she was younger, she played sports in her free time and was even on the soccer team in middle school. She goes to her Baptist church multiple times a week and sings in the choir. God has always been a huge aspect of her life. She spends a lot of her time on her phone, and she still keeps in contact with her friends from Tanzania, many of which are now also in the United States. Beliya Makala wants to become a nurse when she’s older and plans on attending college. Life is easier now in the United States for her family, and they now have easy access to the necessities they didn’t before. Nevertheless, her experience shows how much we take for granted, even something as simple as turning on the sink.