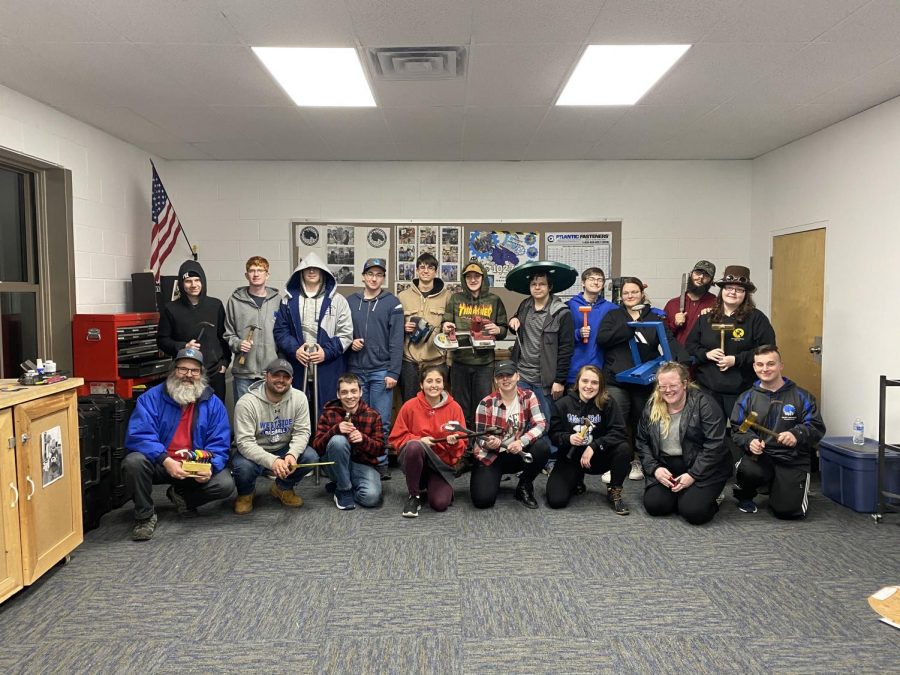 Robotics Club works together to take on this season's challenge. Photo courtesy of Crystal Madore.

The West Springfield High School Robotics team is already preparing for their competition season. The team is advised by teacher Mr. Bernard. Entering a competition requires months of diligent work to prepare. Every year, competition kickoff gives teams a new challenge. The challenge  comes in the form of a video which the team gets together to watch on Kickoff Day. Kickoff day occurs in January with this year’s competition being held in early March. This year’s challenge requires teams to build a robot that can carry and throw balls into holes which are assigned varying point values. The second part of the challenge requires programming the robots to spin a wheel to an assigned color and hang on a bar, with two robots from other teams. Building a robot that can meet these requirements requires a lot of time and effort.

Meetings increase from once a week to six days a week to ensure that they meet their competition deadline. “We try to get ahead by doing six days a week, so as it gets closer we don’t stress out all at once,” said Team Co-Captain and WSHS junior Crystal Madore. The process of making a robot has many steps, including coding, CAD (Computer Aided Design), according to Elizabeth Commisso, the team’s other Co-Captain and senior from Pope Francis High School. Pope Francis does not have a robotics team so Elizabeth, a West Springfield resident, joined WSHS’s team. “As a member from a different school it is nice to be greeted and welcomed as a member of this team,” said Commisso.

Math and physics are used, as well as coding skills, to make the robot do what is desired. Students use their math and science skills and many times learn some more advanced concepts along the way. Later, the team makes practice pieces to do test runs once the robot is completed, to ensure that the robot can complete what is asked of it during the competition.  Even though this team requires serious work and commitment, members enjoy the challenge.

Team members complete a variety of tasks to complete during meetings. Meetings usually begin with looking at the board to see what tasks need to be done, before breaking off into separate groups to work in varying areas that contribute to the building and design to the robot. Many challenges arise during build season, from time management and repairing physical pieces to coding issues. “With coding, there are always a lot of bugs,” explained senior Gregory Donovan, a Co-Code Captain with the team.

Stress comes with the territory, but the team also celebrates many small victories when they finally achieve their goals. The team also has mentors, many of them former WSHS students and robotics team members themselves. These adults volunteer their time to help the team with anything that they can. Mentors also share in the small triumphs with the team. This year some of the team’s mentors include former West Side students Doug Bednarczyk, Eric Welch, and Robert Szmania.

At the competition themselves, there is strong rivalry and friendship amongst competing teams. “It’s not something you would see everyday,” said Build Captain and WSHS junior Anthony Tatro.  “There’s a lot of team work, even with teams you’re competing against,” added Commisso. Donovan described the competitions as, “High energy, like a sports game atmosphere but with robots, and more emotional because you built the players.”

The experience is also very rewarding because students get to see their hard work in action. This itself brings stress and excitement because things can go differently than planned. During competition, teams earn points in matches based on their ability to complete the tasks assigned for that year. These points then contribute to the overall ranking of the team in the competition. This year, the team’s first competition takes place in Woodstock CT, from February 28-March 1st.

No matter the outcome of the competition, team members return year after year to participate with the team. Madore described her favorite part as, “being able to see what we designed being created.” As a team that spends nearly six days a week together, for hours at a time, the students have developed a close bond as they help each other learn from their mistakes and achieve their goals.