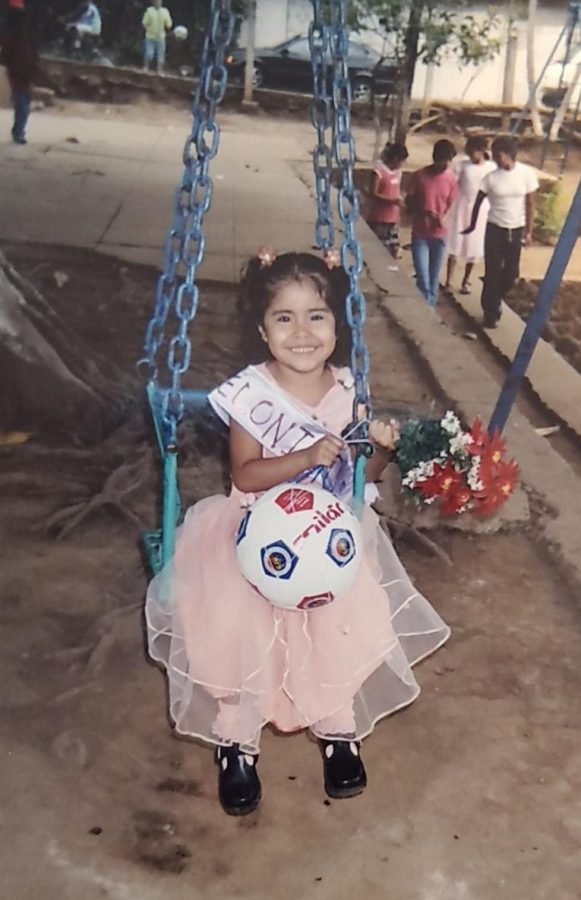 As a young girl, my mother lived in severe poverty. Being the oldest child out of four, she had to start working at a young age of 8 to support her family. “I remember those dark days,” she recalled. ”I was forced to wake up at around three or four in the morning to start working.” Throughout the 1980s, El Salvador was in the middle of a civil war. “It was a scary time, for me and my family. I feared to find my loved ones dead at home.” Eventually, she and her family had to escape her old home in the middle of the night due to how violent things were getting. They moved into a more excluded spot in the countryside.

Later in her teen years, she got accepted to attend school and had to walk for many miles to get there. Unfortunately, she couldn’t continue her studies due to the war getting near where she was and only finished up to the 2nd grade. This didn’t stop my mom from wanting to learn how to read and write, so she would read scraps of papers found on the floor and would write them out. Once in her early 20s, she decided to move to the US and lived with a few relatives in New Jersey.

Just like my mother, my father also grew up in poverty, but unlike her, he got into school at a young age and continued up to the 9th grade. As smart as he was, he had to stop studying due to my grandparents not having enough money, and was forced to start working. Life was unbearable sometimes and one of the few outlooks he had was playing soccer with friends. He also came to the US in his early twenties. He spent most of his time living and working in California. Then, in his early 30s, he decided to go to New Jersey for a job offer he was given.

It was the early 90’s and my young parents met each other through a mutual friend after moving to New Jersey. ”It was like love at first sight,” said my father. After some time dating, they got married and had my older brother, Bryan, a year later. One day during work, my father had a serious accident and injured his back, which required him to have surgery. It was a tough time but with my mother’s courage, she cared for both my dad and my brother.

When my brother turned 4, my parents decided to move back to El Salvador temporarily so my father could heal from his injuries, and so they could see my sick grandmother. After my father recovered, he went back to the US. to come due to the job he had. However, he tried to go to El Salvador every chance he got to see the family since my mother decided that she and my brother would stay there. Bryan would constantly cry to my mother, saying that he wanted to go home. Eventually, he got used to living there. After two years, despite having friends, my brother wanted to have a little brother or sister to play with. Surprisingly, he really wanted a sister, and my parents decided to have another child.

When she began having pregnancy symptoms a few weeks later, she decided to go to the city to make a doctor’s appointment with her sister and traveled on an hour-long ride on a bus. After the appointment was over, my mother received a piece of paper that would change her day, the results on it came out positive. She was shocked. Her plan was to have me in the US but regardless of that, she was overwhelmed with happiness and planned on telling everyone the news at home. However, that wasn’t the case with my aunt. She was too curious and couldn’t wait any longer to get the news at home, so she took the paper from my mother’s purse and saw the results, she was excited. Once at home, everyone heard the news and were just as happy.

All the happiness and joy came to an abrupt stop in January 2001. My pregnant mother was attending church with my father and his parents when an earthquake at the magnitude of 7.6 struck my home country. Everyone was in a panic, running around and trying to protect themselves as things fell over and the floor shook violently. My mother was worried that she was going to get crushed by the walls. Then, the thought of my brother came to her. He was at home with my sick grandmother. All she could do was pray and hoped nothing horrible would happen to them. After 15 unbearable minutes, the earthquake finally stopped. My father went outside and was shocked, just about everything was destroyed, streets were cracked, telephone poles had fallen over, houses were crumbled down, trees were fallen over. Everything was a mess, but, luckily, no one had died.

Exactly a month later, another earthquake with a magnitude of 6.6 struck El Salvador again. This time my mother was at home with a family friend when everything started shaking. She got more anxious when she realized that my brother was still in school. She told her friend to go to the school to see if he was okay since she couldn’t run. Upon arriving, our friend saw that all of the students were outside and okay, including my brother. They all made it out just in time just as she recalled watching the roof collapse moments after. Sadly, only one person died in our town but luckily everyone in our family were okay, and we tried moved on.

“It wasn’t easy, we had no water, food or electricity at home,” my mother recalled. “I, along with other women in the town, had to go to a nearby river to get water or to wash dishes and clothes.” My aunt went around the town collecting whatever leftover food there was and gave it out. It was like that for a few days until the government decided to send help by giving food out, fixing water pipes and giving cell-phones to anyone that had family in the US. Once receiving one, my mother only had three minutes to talk and she called my other aunt. She was relieved that we were all okay, after seeing the horrible event on the news, she had feared we were dead.

Months passed and my due date came, May 1st. My mother finished packing up her things for the hospital stay when she started not feeling well. Thinking that it was just cramped, she decided to lay down in bed hoping it would go away. Sometime later and both my grandma and aunt came to check up on her and found her in pain. Worried, they called my father, and my mother told him to get our neighbor who was a doctor to come over. Minutes passed and when the doctor came, he was shocked, “The baby is almost here. She was supposed to be born in a few hours.” However, there was no time to lose. After two hours of painful labor, I was born.

Growing up in El Salvador, I had a wonderful childhood, despite the dangers of living there. Gangs controlled almost everything there, including the government, businesses and the streets. However, being young, I spent most of my time playing, not giving a care in the world. I remembered this one time, I was playing with a plant when I saw some red ants crawling around. I, being the curious child that I was, decided to stomp on them and ended up getting bitten all over. Luckily, one of my dad’s friends saved me and I ended up repaying him by kicking him because I thought it was his fault. Of course, my mother lectured me not to do that, and I went about my day.

Once I turned 4 years old, my mother decided to put me into a preschool that was near our house. I usually found the classes boring so I would play in the playground for a while, then walk home with someone I knew or by myself. Sometimes, someone would tell my mother, “Your daughter escaped from class today again.” Those were the good days. Thank goodness nothing happened to me though. Looking back, I could have been abducted by a gang for whatever horrors they had planned.

About two months after turning 5, my father got my papers through and I came to the U.S. Life became difficult. Not having our own home to stay at, my family and I had to live with my aunt and her now ex-husband with their two kids. Staying there, I had a lot of time to observe how my cousins lived and it was quite shocking. It’s not only my cousins but kids, in general, were in their house almost all day watching TV or playing with their gaming consoles. Back in El Salvador, I would use to feed the neighbors animals, climb trees, play with dirt, play hide and seek with friends on the streets, playing tag in the park at night and swim in the river. Another shocking adjustment to make was the severe weather change. Since in Central America it is hot all year round, the coldness caused me to develop asthma.

Entering kindergarten was a complete nightmare for me. I knew nothing and no one. Kids would make fun of me for being different and not knowing English. There were a few changes for the better, such us having a house of our own and me finding a best friend. Her name is Stephanie, and she helped me learn English and get through kindergarten. However, I was still doing poorly with my reading and writing skills and ended up getting held back. Even up to this day I still struggle with speaking, writing, and reading in English, although it’s better.

El Salvador is now becoming a better and safer place now. President Bukele is trying his best to get a better justice system, negotiate business with other countries to get better jobs and try to remove the majority of corruption in the government. So far his plan is working. Hopefully, I’ll go back and stay there but for now, I’ll enjoy life here. Not everyone has the same opportunity that I have to come to the U.S. and have a better life and for my parent’s sacrifice, I’m always grateful.