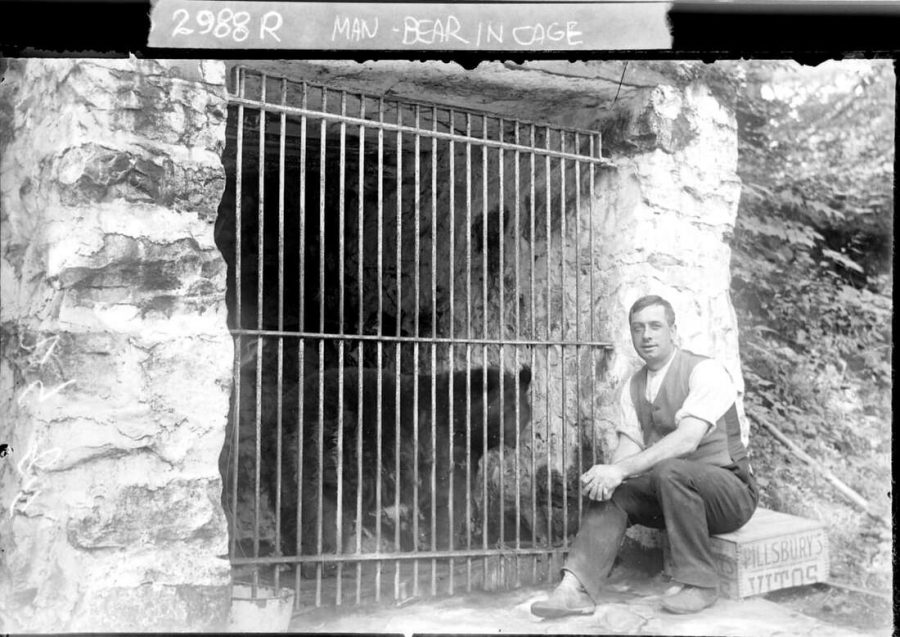 Photo courtesy of http://www.wsenvironmentalcommittee.org/history-photos.html The Bear Hole Resort where they held the three-legged bear.

From the outside, Bear Hole might not look like it has much to offer. The small gated road leading down a path of trees is part of a popular nature retreat that contains some of the hidden histories of West Springfield. Constructed in 1907, Bear Hole is roughly 1,500 acres occupying the northwestern section of Side that borders Westfield and the East Mountain Range to the west and Holyoke and the Ashley Reservoir. The woodlands include trails, animals, and is home to many ecosystems. It also serves as a place for outdoor activities for people all over Western Massachusetts. Although Bear Hole is one of the last remaining large tracts of natural open space in West Springfield, it is under threat to be constructed on.
Bear Hole has an interesting past and contains lots of West Springfield history. Bear Hole in the 1900s, contained the “Bear Hole Resort” that was known for its bear den that contained a three-legged black bear, which was the hotel’s selling point. Although popular, when Bear Hole was turned into a watershed, the resort was forced to shut down and the building was demolished. Present-day parts of the bear den still remain in Bear Hole.
Bear Hole has recently been in the eye of the public because after it was discontinued from being public water supply, and now it is no longer protected from being built on. Mass Audubon and the Department of Conservation and Recreation (DCR) are hoping to obtain a permanent Conservation Restriction on the property, that would ensure that the land is never developed on. It is estimated that a total of $1,150,000 is needed to complete this deal, along with protecting and caring for the land. The DCR donated the majority of the fund, however, they still need to raise the remaining $450,000. Under the Conservation Restriction, West Springfield would still own the land, the water, and rights to Bear Hole, but the town would not own the commercial rights. By losing the commercial rights this would prevent development on the land.
According to Mass Audubon, Bear Hole is a very important place for Massachusett’s carbon storage, floodwater storage, wildlife corridors, rare species, and recreational and community health. Numerous people use Bear Hole for many outdoor activities each year. West Springfield Officials have been voting on the preservation of Bear Hole. The fight for legislation to protect Bear Hole hits very close to home to many who use it. Many residents have not stayed silent on this issue, and made signs that say “CR for Bear Hole”. Many adults in Western Mass believe their grandchildren deserve the right to Bear Hole, and building on it would be disrespectful for future generations. Whether or not Bear Hole will be put under this conservation restriction is still up for debate and has not been looked further into due to the pandemic.
Due to social distancing and the stay at home advisory, Bear Hole has attracted many people. Bear Hole’s parking lots have been flooded with people, many people go on walks or bike rides in order to get outside. A lot of people have been using Bear Hole in order to get outside, this is perfectly healthy as long as people are using the space respectfully and obeying the CDC guidelines to social distance.
Bear Hole provides opportunities for children and parents to get outside. In elementary schools, Bear Hole serves as a common field trip spot that allows students to learn about the environment. As well as providing unique learning experiences, the Bear Hole serves as a commonplace for walking, biking, hiking, and mountain biking trails. Many runners and walkers use the trails every day. Beautiful year-round, Bear Hole is also used by people who snowshoe, snow mountain bike.