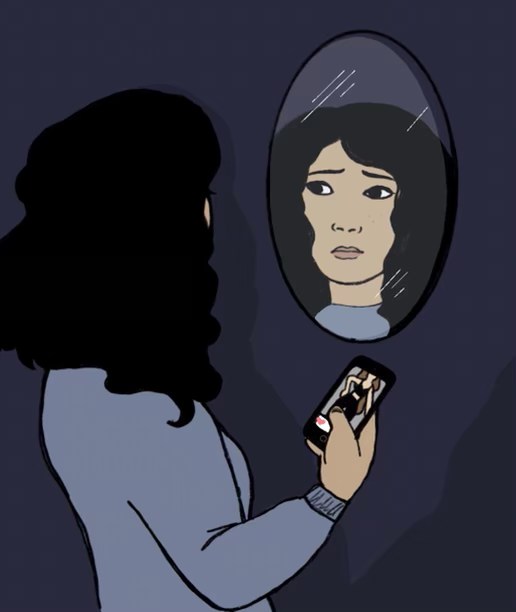 As teens use of social media rises during the pandemic, their self esteem is lower than ever.

Throughout the pandemic, social media platforms have risen in engagement and effect in the lives of many across the globe. Apps like Instagram, TikTok, and Snapchat, keep family, friends, and other relationships connected by allowing users to share some means of communication with each other when our lives seem to keep us apart. Although using social media has its positives, it can also bring negative feelings and perceptions of ourselves and others.

According to the National Eating Disorder Association, body image is how you view yourself when you look in the mirror, or when you picture yourself in your mind. Dr. Sara Gonzalez, a pediatric psychologist at Children’s Minnesota, explained that poor body image can lead to low self-esteem, anxiety, depression, and eating disorders.

Over the past eight months, social media usage has risen dramatically. A Harris Poll conducted between late March and early May exposed that between forty-six to fifty-one percent of United States consumers have been using social media more since COVID-19 erupted. Instagram, Snapchat, TikTok, and Youtube have been the most used platforms among West Springfield High School students over quarantine. These types of apps are used more than others, because of their addicting entertainment styles. A quick swipe on any of these platforms and more content arises. You can find anything you’re interested in… inspiration, relatability, or someway to pass the time. This type of behavior can be isolating because we are not always the same as we present ourselves to be. We are able to build relationships based off of false personas, and we have the ability to lose ourselves and our sense of reality.

“Quarantine has definitely affected my body image and the body image of others as well. My overall motivation seems to be much lower lately, and with some sports being less accessible, it can be hard to get outside or stay motivated to exercise in your own home. The lack of exercise and increase in stress eating has taken a toll on my body, and it can be really upsetting to see a negative change in the way I look, due to a lack of motivation, time, and energy,” an anonymous sophomore at WSHS explained. This type of behavior can be accredited to many things.  Tools like PhotoShop, altered personalities, and other editing workshops make influencers appear a way that they really aren’t. When we scroll through Instagram and TikTok and see these people we look up to, some envy their bodies and look down on themselves because they look different. As the pandemic continues, statistics relating to eating disorders are on the rise. The NEDA reported that there has been a seventy to eighty percent increase in global eating disorders throughout the past couple of months.

Although several students at WSHS have been affected by social media during the pandemic, others see no change. “I have actually spent less time on social media, because it annoys me the things people have to say about every issue, and that they don’t let others have a different opinion than them,”one student shared anonymously. This exemplifies how social media not only affects the perception we have on ourselves, but others as well. Our TikTok feeds are filled with thousands of likes and comments, degrading and bullying the user because of their political views, insight on life, their personal situations, or strictly on how they look. Reading comments of random people telling others to harm themselves, lose weight, or “get pretty” is shameful, and epitomizes the immaturity that overcomes many when scrolling online.

Dr. Gonzalez furthered the conversation by referring to social media trends. “During the health crisis of COVID-19, ‘quarantine 15’ became a viral social media trend that is harmful. It portrays weight gain and not being able to keep the expected body standard… that is the worst thing that can happen to an individual.” She also added that “COVID-19 has brought on a lot of exercise-related concerns. Not being able to be as active as they were in the past has led the youth to voice concerns about their ability to maintain their physique.” As ‘quarantine-15’ begins to settle, new trends are on the rise.  TikTok videos of girls in their teens ask, “am I above average, average, or below average?” where people of all ages across the world insult, degrade, and bring down these “normal” users. People pick on their noses, hair, and the way they blink, all in the hopes that they make sure she knows she is “not average.” The bullying on these apps has gotten so bad over quarantine, several consumers have decided to completely remove their accounts, as it has damaged their mental states so drastically.

An anonymous junior at WSHS supports this claim by describing her experience with battling her own body image during these unscripted times. “I feel like I have gained weight all of quarantine and have been overly anxious and sad. Seeing people motivated and working out makes me upset because I don’t have that motivation.” On the opposite end, another sophomore contradicts, “if anything, I feel a lot better about myself. It’s almost like I’m indifferent to how I look now.”

It may seem like social media platforms affect the body image of younger generations, but that is not always the case. Celebrities like Jennifer Lawrence and Jason Momoa have been battling off-handed comments before the pandemic even began. In a Twitter post from February of 2015, Iggy Azalea, an Australian rapper and former model, responded to hate comments she was receiving on her social media accounts, “the internet is the ugliest reflection of mankind there is.” More recently, an unknown spectator commented on Jason Momoa, an American actor who starred in Aquaman, and his body shape: “been working on his dad belly; someone needs to start lifting again…” This treatment from users hiding behind their screens effects everyone, and ultimately targets the well-being of influencers and non-influencers alike.

Although social media platforms have promised differing perspectives among many of their consumers, one student reflected on her positive outlook on social media during the pandemic. She concluded, “I’m more aware of how people’s words might affect others. I used to make fun of people online who appeared ‘different’… And I’m so disappointed in that. So when I do see people who are different, I ask how their day was, if they drank water and had their meals. I tell them that they’re beautiful, and what others think is wrong. Because everyone is beautiful, even if they may not fit society’s beauty standards.”