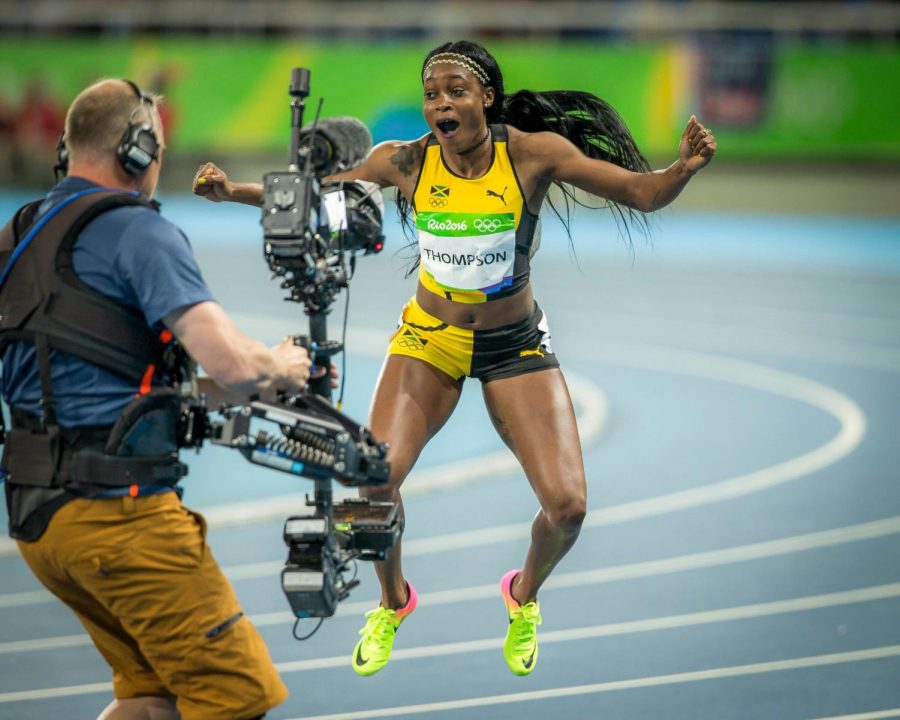 On a Saturday night at the Olympic Stadium in Tokyo, Japan, Elaine Thompson-Herah became the second fastest woman in history. Pointing at the scoreboard before the finish, just like fellow Jamaican Usain Bolt did at the 2008 Beijing games, she had taken home gold, breaking the Olympic world record, and leading Jamaica into a rise in the Women’s 100m final. Since the 1988 Olympics, Griffith Joyner held the record of 10.62 seconds, but after becoming the fourth woman to win two medals at the Olympics in 2016, Thompson-Herah beat a record with a time of 10.61 in the women’s 100 meter this past year.

According to the NCAA, the number of men’s teams nationwide increased by 62% last year, while women’s teams increased by 64%. Women’s teams have outnumbered men’s teams since 1996-97, when women inched ahead for the first time with 7,618 teams to the men’s 7,608. Today, 10,586 women’s teams compete in NCAA championship sports, compared with 9,159 men’s teams. Among many of these world changing events, this summer’s Olympics really displayed women athletes coming in with world records and high achievements. Women’s sport history started back in the 19th century. By the end of the 19th century, women were allowed to participate in sports including horseback riding, archery, golf, tennis, skiing and skating. Women competed for the first time at the 1900 Games in Paris. Within a total of 997 athletes, 22 women took part in five sports: tennis, sailing, croquet, equestrianism and golf.

“The world record is a short-term goal, it’s quite close but if I end the season without taking it, it doesn’t matter,” said Thompson-Herah before the race, making it clear that beating the record wasn’t her target at that moment, and she continued on to say that she was a double Olympic champion (in the 100m), “I’m delighted with my performance. I have never been this fast. I’m very happy with what I’ve accomplished in 2021,” she said in an interview with Sports Illustrated, from July 31st of this year. Shelly-Ann Fraser-Pryce, her rival, and another Jamaican sprinter won silver, completing the event in 10.74 seconds. Shericka Jackson, also from Jamaica, took bronze with a time of 10.76 seconds. Before she passed away, Griffith Joyner told her husband that she hoped someone would beat her time, “I remember she once told me, ‘I never want anybody to be like me. I want them to make bigger footsteps than me,'” he said. “That was always her dream.” Even though she is no longer alive and with them, it seems as if the tradition of “girls supporting girls”- a movement that has swept through pop culture, expressing the essential part of feminism as being the mutual support of women towards other women- has continued on, with girls now beating each other’s records, compared to a time in history when they weren’t even allowed to participate in certain sports. Thompson-Herah mentioned that, “It’s good to be able to challenge a record that women thought for a long time was impossible to break, and it speaks to the evolution of sprinting.” This really shows the drastic change in society, and the growth of women in the sports world.

The girls’ track team at WSHS was inspired and impressed with the events of this past summer. “I think that they were really good this year. They have a lot of passion right now, and the women’s team needs passion, especially today. I feel like they really applied that this year. Especially the hurdles, they were amazing,” said Elizabeth Coolen, a runner on the track team. Hannah Debian (Sophomore) agreed that it was a good moment for female athletes but feels that there still needs to be more done to promote women in sports. “I think that they were pretty good, I think that we need to get more women in sports because I feel like sometimes we’re still lacking in that to this day, so I feel like when you have more advocates, especially people breaking records now, it’s helping young girls come up and say ‘oh wow I can do that too,’” said Debian. One of the seniors and pole vaulters on the track team, Emily Bergeron, talked about the lack of pole vaulters in our school specifically, “I thought that the pole vaulters were really cool, because I do pole vault, but I do see that not a lot of other girls around here do it.” Similarly, sophomore Gabriella Molevero who said, “I thought they were really inspiring and fun to watch, especially the longer distances. It was really cool to see the women runners.”

Matthew Griffin, the school’s girls track coach, is a strong advocate for women in sports, and the opportunities that they are finally able to have. Coach Griffin looks forward to watching the Olympics every year, and not just track and field – which he loves most followed by swimming and gymnastics- but many other sports too. “The greatest athletes in the world come together to compete in front of the globe, been doing it since Athens 1896. Every athlete has a talent and is proud to display it on the biggest stage. Coach Griffin loves watching our USA teams but recognizes that there are so many great athletes all over the world. “Some of the greatest athletes in the world, past and present, are women. It has been a struggle through the years(and still is) for equality and equity in sports. Not too long ago women could not compete in certain sports, marathons, or even hold administrative positions. It took trailblazers like Althea Gibson, Babe Didrikson, Kathy Switzer, Pat Summitt, Ann Meyers, Val Ackerman and Flo-Jo to lead the charge and stand up for many. Can you imagine not being able to run or play basketball on a team because you are a woman?” According to Coach Griffin, improvement in all areas is needed, from hiring in admin positions, salaries, to training for women in sports along with facilities, in order to expand women participation in all things. “Exposure leads to expansion.”