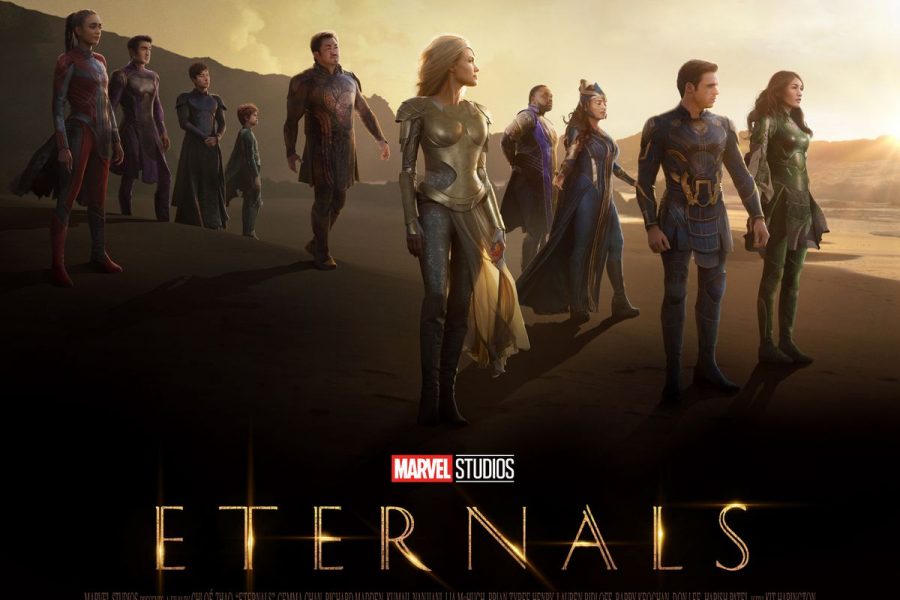 Contrary to the film’s underwhelming 52% on Metacritic and 47% on Rotten Tomatoes, Marvel’s Eternals presented a fresh, unconventional take on a classic Superhero origin film. Unique to Marvel’s prior origin stories, Chloé Zhao’s Eternals introduced a wide roster of new heroes- each with their own respective god-like skills and abilities. The movie focuses on a group of ten aliens, dubbed by their creators; the Eternals. Sent to Earth with the mission of protecting life on the planet, their goal is challenged by the presence of looming monsters and various other obstacles throughout the film’s 7000 year time span.

The threat of the deviants; another predatory alien race that had plagued the earth since 5000 BC, had been thought to have been extinguished by the Eternals in the year 1521. However, in the present day they have returned- far deadlier than the years prior. With the mutated ability to absorb the powers of the Eternals, the heroes reassemble in order to rid the world of them for good. While the deviants’ concept and design is lacking in creativity, their abilities being unoriginal and mediocre, as well as their appearances being basic and generally uninteresting, the deviants still proved to be intimidating, though forgettable desperadoes that are to be listed in Marvel’s wide array of iconic villains.

While the movie’s primary antagonists fell short, it’s lineup of strong personalities at the film’s forefront such as; Angelina Jolie (Thena), Richard Madden (Ikaris), Gemma Chan (Sersi), and Marvel’s first live-action, deaf Superhero, Lauren Ridloff (3 dMakkari) made up for the deviants’ unimpressive delivery. With a main cast of 10 characters, Marvel displayed their expertise in the film industry as each individual had their own storylines that didn’t feel rushed or out of place.

The film introduced a lot of new concepts that will undoubtedly be utilized in Marvel’s future projects. It explained the great phenomenon of Marvel’s fictional universe and did it in such a way that included individuals from a number of different backgrounds while showcasing beautiful cinematography that displayed appealing visuals regarding the movie’s special effects and general setting.