Band, Chorus, And Color Guard Put On A Pleasing Performance 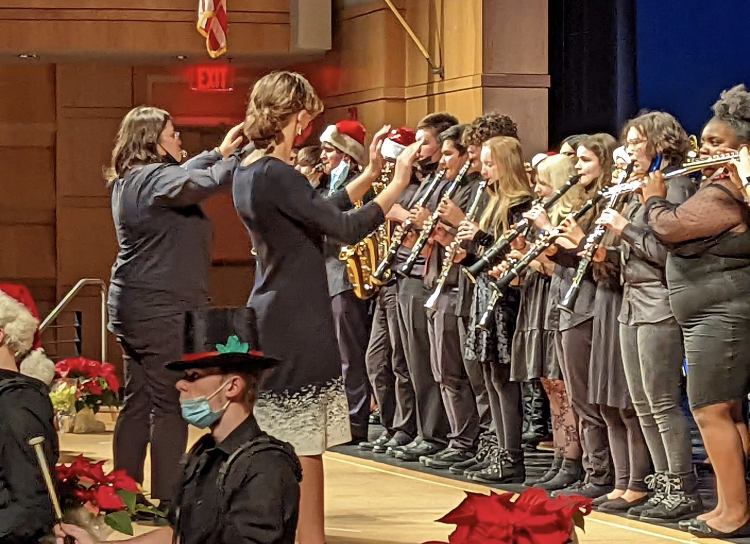 On December 16 the band, chorus and color guard performed in the WSHS auditorium. Above the band performs on-stage and in the crowd.

On the evening of Thursday, December 16 WSHS held two Winter Concerts in the auditorium with performances from the school’s band, chorus and color guard. The concert was spectacular with some classic Christmas songs and some less familiar pieces that were equally enjoyable.

The band performed “Nightmare Before Christmas Melody” by Danny Elfman, “Wizards in Winter” by Trans Siberan Orchestra , “Tuba Christmas”, “African Holy Night” by Robert W. Smith, and ended it all beautifully with “We Are Family” by Sister Sledge and “The Fight Song”. The band members performed their hearts out and it showed. “Wizards of Winter was the most fun to play. It was really fast,” said Cole Park, who plays xylophone. They had the audience humming along and nodding their heads to the beat. “‘I’m really proud of the band as we put this music together quickly.  They sounded amazing considering the short time we rehearsed the pieces,” said band teacher and conductor Mr. Holesovsky.

The chorus was delightful to watch as well, they lit up the stage with their voices. The chorus lead by first year chorus teacher Mrs. Taylor sang “Winter Song” by Rebecca Rossiter, “Fa La La Noel” by Ruth Elaine Schram, “Light a Candle” by Andy Beck, “Yuletide Rhythm” by Greg Gilpin, “30- Second Merry Christmas” by Donald Moore, “Lets it snow” and ended with a singalong of “Rudolph the Red-Nosed Reindeer” which got lots of involvement from the crowd. Chorus also had two soloists Simone Lavoie and Jay Barrows whose voices sounded angelic.

The concert ended with a performance by the Color Guard. They looked graceful as they moved on the stage. They waved and tossed their elegant white flags as the audience watched almost as if they were mesmerised. When it was time for the band to play “We Are Family” and “The Fight Song” they went into the audience with their rings and danced along.

From my view of the concert backstage, I was able to witness the hussle and bustle that occurs before the lights go on and the auditorium fills. As band members, dancers, and singers all practiced and prepared in the halls and setting up the stage, the energy was filled with nerves but also the excitement that everybody shared.

Overall, the performance was captivating and entertaining. From backstage, I could see all the hard work that the members of the Band, Chorus and Color Guard put in and how proud they were when they walked off the stage. I was pleasantly surprised by their performances. For me being able to see behind the scenes of what it was  like for the people performing was my favorite part. Seeing them getting ready and having fun was what made it fun for me to watch. The band will be preparing for the MICCA Music Festival in April hoping to bring home gold.