Drama Club Comes Together In Their First Performance 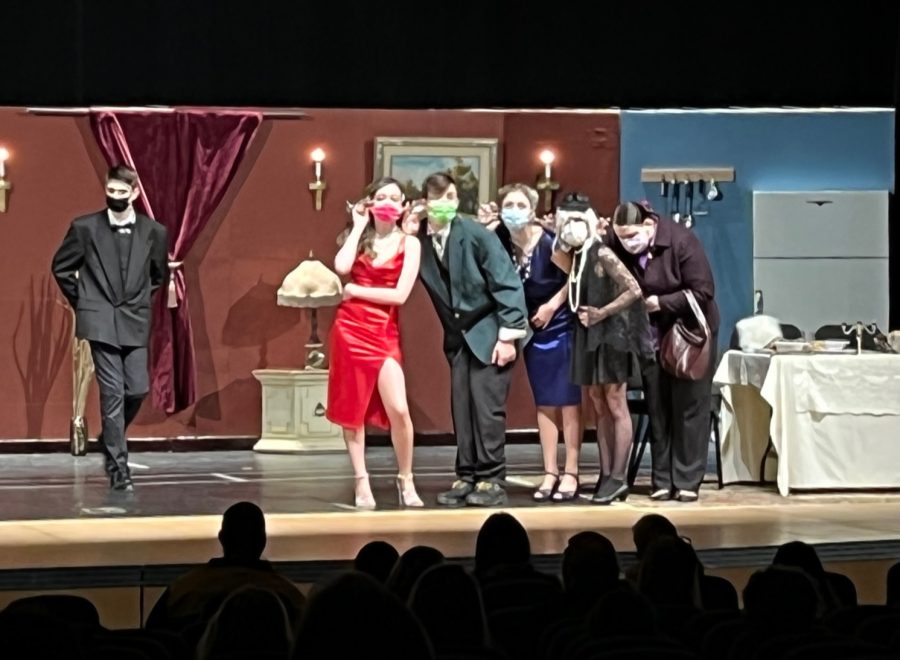 On December 10th and 11th, the West Springfield Drama Club presented “Clue” on stage. The opening scene consisted of Yvette (junior Sophia Pedro) wiping down glassware while Colonel Mustard (sophomore Liam Pomeroy) stood close behind, hearing a sudden knock on the door. The two were hosting a dinner party, set in 1954, not too far from Washington DC.-  and the rest of the cast entered after a greeting given with a fake name from Colonel Mustard to each of them. The night continued as the cast performed the classic story of mystery and murder.

The costume design led by Pheoby Fleury, consisted of evening-formal outfits that were color coordinated with each character, (purple for Mrs.Plum, green for Mr.Green and so on). Each character’s unique costume really added to the representations of their individual roles.

Crew member and actor, sophomore, Helen’s Sanders’s dad built the entire set. “Watching that all come together in my own garage was insane,” she said. Some of the set flats were so big they couldn’t even fit them in the garage. Sophomore Logan Trainor (Wadsworth) recalled the many obstacles rising on their way to the final shows including a sick director and the fact that they started practicing the second act a few days before the first dress rehearsal. Still, all the actors agreed the chemistry between each other was great.  The biggest issue they had was the lack of sound on the last show, where the computer reset itself as soon as the show started. Despite this setback, it happened to be their favorite show, showing them just how well they worked together as a cast.

“Oddly enough, as our sound system stopped working, with only a few mics cooperating and no sound effects being available, it was a miracle because somehow the mics that did work, really helped carry on the show. People backstage stomped their feet to mimic thunder or gunshots. The cast was able to come together and improvise quickly. Luciana and I stomped our feet when I got shot during Act 1 to mimic the gunshot. Everything was fixed by Act 2, and the show went on smoothly,” recalled Helen.

“Being on the cast of Clue was one of the best experiences of my life,” said Trainor. He had never been in a theater production before and was always watching from above. Being part of a production was like being part of a makeshift family for him, as he got to spend time with and get to know everyone. “ The smallest things were the most memorable,” he said.

Luciana also shared how much the cast and crew of the Drama Club has affected her. “It was overall such a wonderful, positive, family-like environment. During some of my hardest months I was facing during our rehearsal period, the cast and crew were there for me and I felt welcomed and appreciated. I feel so lucky to have had the role of Scarlet and I’m so happy to have had this opportunity,” said Casillas. The cast members agreed that even with the late night rehearsals, it was a blast participating and having this experience with the rest of the cast.
“Even with the couple setbacks we had with our final performance, our cast had such an amazing bond that we were able to fill any gaps and bounce off of each other in times of forgetfulness,” said Luciana.

The students worked together and even throughout the final performances, reflected how comfortable and familiar they all felt with each other, improvising through minor mess-ups.

The day before opening night, the cast was running through the last scene. It was around 9:45 p.m, everyone was kind of tired and miserable, and as they all were just wanting rehearsal to be over with, Helen was reminded of this memorable moment for the entire cast.

“I was sweating my butt off in my costume backstage, practically falling asleep in my chair. We were in this scene where Logan pulls a gun out. However, when Logan pulled the gun out, it completely broke in half. Everyone immediately started laughing, we kept trying to get through the scene but none of us could stop laughing at the tiny nub of a gun in Logan’s hand. Luciana was laughing so hard she was crying. It completely brought everyone’s mood up. There were so many little things that made this show so memorable. From the first time Adam and Kacie carried my character’s dead body across the stage to when we all helped my dad set up the stage 1 flats.”

Many of the actors are not only continuing with the drama club but have a future career goal of acting ahead of them. Luciana Cassilas is planning on doing everything she can to continue in any upcoming projects the school puts on, and she hopes to be able to act in her future, it being her dream career since she was a little girl.

The final performances  went on with many more memorable moments for the cast, as well as many laughs for the audience. After the success of their first show, the drama club will be putting on a musical this spring.