My Dad’s Journey To America 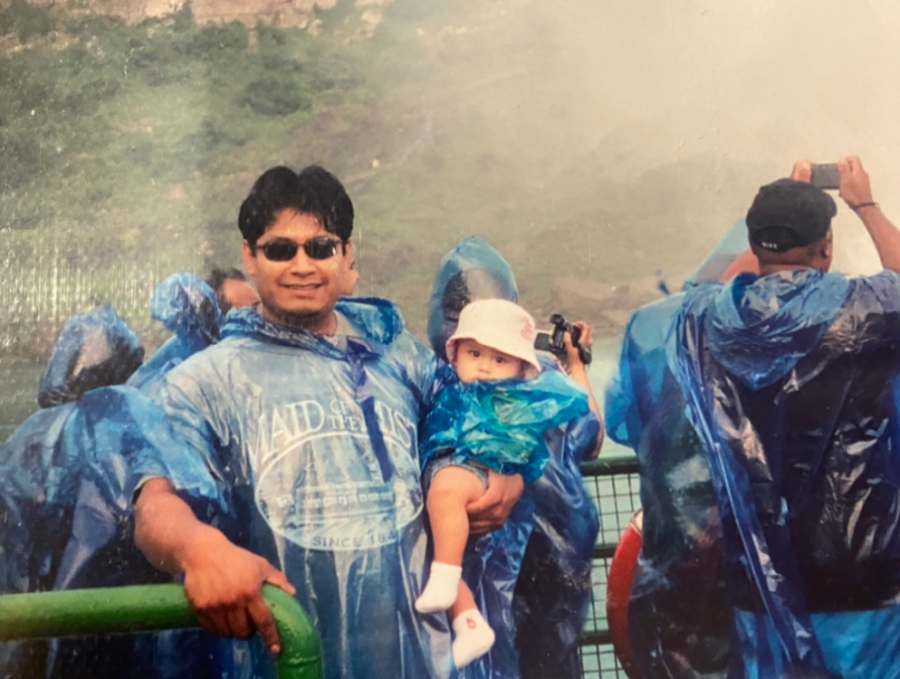 Jose Cortes enjoying his life in America at Niagara falls with his one year old daughter Emily Cortes.

January 2022 has marked four years for my dad with his visa and green card and it’s been one of the greatest moments in my family’s lives. My dad, Jose Cortes, lived here in the United States for 23 years. The majority of his life that he lived here, he lived illegally. Even though my dad was an undocumented immigrant, he was still a hard-working person. His plan was to work and go back to his homeland. He didn’t realize he would end up staying and having a family. “But crossing the border something good does happen… having a beautiful family,” he said. With all the difficulties and obstacles my dad had to go through he still received something amazing.

I remember my dad telling me how happy he felt when he first crossed the border, but he sounded disappointed, “I felt happy because I was in the United States, but at the same time I felt sad because I missed my family, my food, my culture. I saw a lot of discrimination from the people in the United States towards me. But I felt glad because I was able to get over with everything and work to earn money,” he recalled. My dad had to face a lot of discrimination back then. For him it was harder back then seeing all that backlash for our people. But he didn’t let that upset him; he still went on and went to work.

Crossing the border has to be one the most dangerous acts to do in your life. For him it meant walking for nights in the middle of the desert with no water or food. It took my dad three days and two nights to arrive in Texas. He remembers the mistreatment he got when he was crossing here, “…being abused, and assaulted by the delinquents from the border. Later being mistreated by the guards from the border,” he recalled. He always told me how the nights were the scariest moments because it was dark, and you couldn’t see anything. What made it worse the coyotes would go out at that time, boarding patrol would go out and he would need to hide.  The most difficult part was his last time coming to the United States, where he brought my cousin Chucho. “I almost died of thirst that time,” he said. My dad would come and go, he would stay in America for a while and then go back to Mexico. In the year of 2002, he finally stayed here for good and moved to Massachusetts where he lived with my aunt and uncle.

As for his life in Mexico, I wouldn’t call it perfect, but it was okay. He had a house and a family, but there were no jobs. In Mexico looking for jobs was difficult, and it still is. My dad would always hear how America was the country of money, the country where you will find a job guaranteed. “My decision to go across the border was unexpected, I needed extra money to feed your sisters in Mexico, and to help out your abuela. All I had to do was find a job up North.” There he ended up having a bunch of jobs. When he first got to Houston, he worked as a dishwasher and busboy for a restaurant called Nemphis, then went to work in construction for just seven months. When he finally arrived in Massachusetts. He worked at this Chinese restaurant down in the food court in the Holyoke Mall for three years. Then when he met my mom he started working for this company called Hasbro, where they made toys, board games. This was my favorite because every Christmas he would bring toys from his job and give them as presents. Working in Hasbro was one of his longest jobs because he worked there for about 10 or 11 years. Since then he would work in construction jobs, landscaping jobs, and any jobs that would pay him in cash. But now he works for this insulation company which he has worked for four years now, and he was promoted to crew chief.

His journey to America wasn’t easy, it was hard but worth it. That’s why I love sharing his story because with all the struggles he had to go through, he’s done everything to support me and my sister. My dad is the reason I want to finish my education, graduate from law school to become a great immigration attorney and help out people like my dad. To help undocumented people fulfill their American Dream. There’s one word I can describe my dad and that is fearless.