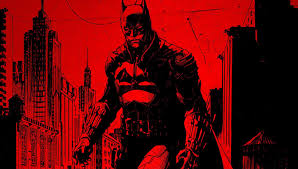 The Batman, the 2022 film by Matt Reeves, is the culmination of 20 years of superhero movies. It takes a dense and realistic approach to the cape crusader’s heroics, avoiding the mistakes and mishaps of every single comic book adaptation before it, and makes the experience so fresh that it shouldn’t be seen as a “comic book movie” but as a modern cinematic masterpiece. The film features Batman as he attempts to take down the Riddler, a deranged serial killer, as the Riddler cruelly attempts to remove corruption from the city by killing its biggest liars.

To truly explain how effective this movie is in telling an engaging Batman story, I think it is important to outline my opinions on the character of Batman. With a pedigree of 82 years of mixed-media adventures, there isn’t a single person on earth who doesn’t recognize the familiar bat-shaped cowl of Bruce Wayne, and so when making a modern adaptation it is easy to hang on the character’s laurels (Christopher Nolen’s Dark Knight trilogy) and create a direct adaptation of the comics (for the most part). Or to make a different and clumsy reimagining of the vigilante (as seen in Zack Snyder’s Batman v Superman or Justice League. I was never a fan of Batman, and so these different interpretations and the cries of annoyance from many die-hard fans of the character fell on deaf ears. I’ve seen the Dark Knight and both of Snyder’s outings with Batman, but they had zero effect on me. Over and over again I failed to see the reason why this character in particular resonated with so many people. All I saw was a rich jerk who uses his wealth to push his agenda on the city around him. That was until I sat down with The Batman and enjoyed every single second of the movie, wishing only the best for the billionaire and his collection of colorful characters. None of the other Batman movies made me a fan, but this one did.

Why did this movie work where the others failed? That’s the question I’ve been asking myself ever since I stepped foot outside of the theater. On paper, nothing about the Batman mythos (as far as I know ) was changed, and so I would argue that the strengths of this movie came down to execution. The most dramatic takeaway that the movie has is its visual design. Gotham City has seen as many aesthetic changes as the character of Batman himself, taken in two different extremes, you have the gothic and Tim-Burton-esk nature of well… the Tim Burton films or the more modern interpretation as seen in the Nolan trilogy where Gotham is aesthetically no different than New York. The Batman makes a tasteful combination of both kinds of Gotham, with the ornamental cold stone of many of the richer buildings in the city (including Wayne tower) and the more grounded 1920s inspired underbelly of the city, it explores a wide range of styles as Batman goes from location to location, offering enough to appease both a more critical viewer of the Nolan films, while also extending plausible deniability with the gothic side of Gotham. The clear, almost dialectical, styles of the movie further pushes the themes of the power money can allow, with the wealth and class of certain characters being matched with wide stone hallways and tasteful views of city skylines, as the less economically stable nature of other characters are highlighted by the dirty alleyways and crowded clubs, never exceeding a second-floor view of a dark and wet street below. The only tie that every side of the city shares is the never-ending heavy rain as it pounds like bullets over almost every scene, drenching the actors in gallons of water no matter if they are on a grand staircase with parades of cars, or huddled in dark underpasses.

The setting comes alive through the cinematography and the choices of color in every shot. You can tell that Matt Reeves and his crew spend hours on end picking out a perfect color scheme for every shot, rain lit with ethereal blues, a rescue flare blazing bright red as a torch of hope, or the club lit by pulsating floodlights, every single scene dotted with colors so dynamic even now, hours after seeing the movie, images replay in vivid memory of a carefully painted Gotham. I can’t speak much for the type of camera shots they used while filming the movie, but as a casual film enjoyer, it felt as though the camera was part of the world with shots I didn’t even know could work in a movie.

The film’s score, written by Micheal Giacchino, also lent a hand in making Gotham feel as real as my friend sitting next to me. The use of a few different leitmotifs and instruments to connect to each character and setting is no different than how most films are scored, but Giacchino made every track as unapologetic as possible. Mirroring the attitude of most of the crew of the movie, the choices in music are as brash, loud, and in your face as an opera. The music didn’t take a backseat as it screamed all it had throughout the movie, even opening with a horror violin screech in the first 10 minutes. It never felt invasive though, as it seemed like the script was built around the texture created by Giacchino in a score that will be hard to top, and even harder to forget. The repeated use of Ave Maria, written by Franz Schubert, not only tied into the movie thematically but gave a constant throughline through the time in Gotham, even showing up in the score through more twisted variations of the iconic opera piece. Although the use of licensed lyrical music can be a bit tacky in most films, the few modern songs included didn’t take away from the scene at large, but rather added to what was happening on screen, and the slow emotional rock used furthered the characterization of this version’s Bruce Wayne.

Before getting into the plot and thematic relevance of the movie it would be important to establish this version of the iconic characters we have grown to love (or in my case, tolerate in any other Batman film). The iconic returning characters are where you expect, Bruce Wayne being the cape crusader, Alfred Pennyworth as his loyal butler, and commissioner Gordon as his closest confidant in the police force. As I said before, nothing in the constant batman mythos was changed in service of this movie, but the differences begin with their personalities. In many interpretations of the character, Bruce Wayne can come off as a boring philanthropist with a stoic and focused demeanor and straight-edged witty attitude, no different than all of the other middle-aged white male superheroes dominating the last 20 years. This movie has made efforts to change that interpretation. This version of Bruce Wayne comes off as very emotional, almost to the point of bordering on emo, as he journals his endeavors as batman,  stays a broadening recluse during the day, and listens to rock. His stoicism is not one of having nothing to say, but rather having a lot to talk about but not wanting to say anything, as characters around him usually take his silence in strides and continue the conversation around him (except for the select few where he openly discusses with) this Bruce Wayne is awkward and sheltered, but a genius and great detective.

Leaning less on the physicalities and violence of the character, Robert Pattinson’s Batman’s greatest strength is his mind as he strives to unravel the riddles presented by the main villain. And what the main villain it is, the Riddler played by Paul Dano, might mark a first for comic book movies, his character never even receives a single punch from the caped crusader. The weak nature of the riddler does not hinder the character. As a reflection and narrative foil for Bruce Wayne, he uses his mind to outsmart every character on screen. The performance of the character himself was a bit inconsistent, as he is supposed to come across as unhinged and uncomfortable, but is played with such die-hard commitment that it almost seems comical at times (I think I at least let out one laugh as I listened to the riddler). The romantic chemistry between Bruce Wayne and Selina Kyle (played by Zoe Kravitz) was not an outstanding part of the movie, but it also didn’t hinder the growth of either character throughout the film’s runtime and was enjoyable enough to watch as both actors put their heart into their roles.

For being a two hour and 55-minute movie, it flowed like a raging river. It didn’t seem to drag at any part and it was sharply written to the point where even as I was paying full attention, I might have missed the more subtle details and nuanced themes. Every single piece of dialogue sounds completely in character as the serious tone is underdone skillfully with just the right amount of comedy without turning the film into a quip-quest. The plot itself follows Batman as he attempts to uncover the corruption in Gotham City, being guided along by the serial killer Riddler, he uncovers secrets that he didn’t even suspect to exist. It shows Bruce Wayne deal with his wealth in a way we have never seen a modern comic book movie deal with before as he has to grapple with the question of is his wealth and status a tool to help the city, or is it a privilege that takes money away from the people that need financial stability? The movie deals with this, corruption, the place of the media in modern-day times, and even incel culture in a balanced and thoughtful way, not having one theme, in particular, overshadowing the rest, but having each character’s growth be independent of those themes. One case seems to come to mind as it is never answered in the movie if Bruce’s wealth really is a curse or a blessing, even as it is pushed strongly that Bruce’s wealth hurts more people than it helps, the movie doesn’t end with Bruce doing anything about it as it remains a character flaw to be tackled another day, or simply just be part of who he is. That’s one of the greatest strengths of the movie is that it doesn’t go out of its way to make each person objectively good or bad, nor does it try to make everyone neutral. There are good and bad choices in the movie made by all of the characters, but as we begin to learn throughout the movie, actions do not necessarily condemn you to a “side” but you can define that line on your own terms.

This film feels like everything comic book movies have been leading up to for the past 20 years, taking something from every movie that comes before it. You can see it in the brighter colors and comic-accurate costumes akin to marvel’s previous endeavors, but also not just being a summer blockbuster like most MCU movies tend to be as there was so much care and consideration put into this movie. It takes the realistic and grounded nature from the previous DC and Batman movies, but does not borrow their overly edgy and dark nature. It has the thematic relevance of the first two Sam Raimi Spider-Man movies or the Christopher Nolan Batman trilogy but packs it dense with the type of writing seen in something like Marvel’s daredevil with characters that feel more like humans than they do comic book characters. Overall, The Batman is a movie begging to be seen and the ultimate peak of visual superhero media, as this is the first 10/10 that the genre has to offer.