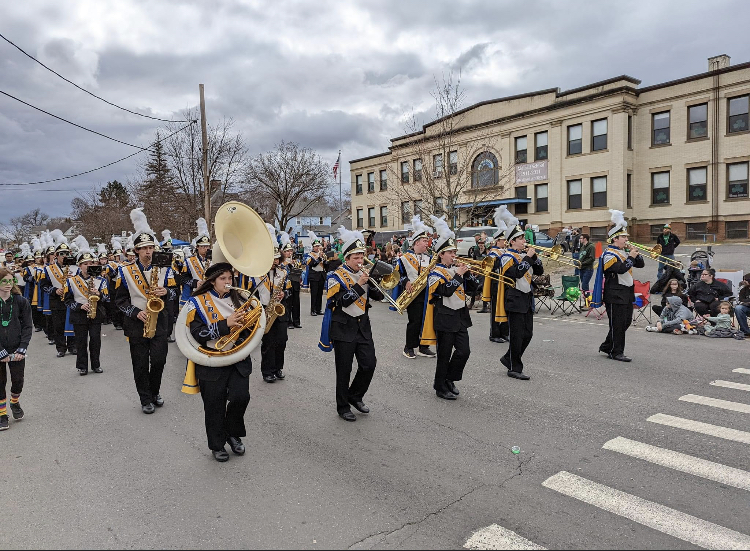 The band can be heard throughout the whole school, from hearing musicians practice as you pass by the band hallway, to every single home game in football, the band is a constant (and sometimes overlooked) element of what it means to be part of West Springfield High School. Over the years the band’s involvement in the school has increased as the musicians are taking on new and exciting challenges and growing as a musical force to be reckoned with. Although covid cast the band into obscurity, as the effects of covid are beginning to be blown away and the dust cloud of a global pandemic begins to settle, the band that remains has only gotten stronger.

The newfound professionalism and strength of the band is due to many different factors. One of the strongest influences is band director Mr. Holesovsky (known by his students as Mr. H). This year marks Mr.H’s fifth year as the director of the high school band, but he’s been teaching music for 19 years.

From the first day on the job Mr. H has attempted to push the band past the limits that defined it before. He has shaped a lot of individual aspects of the program over the years, from the community of the band, each of the musicians within the ensemble, to slowly and patiently molding the band into a reflection of every member’s passion and enjoyment of playing an instrument.

In order to have a professional sounding band, community and teamwork are necessary. Everyone is making music on stage and if even one instrument is out of place rhythmically or tonally, then the whole thing falls apart. So teamwork from all the musicians is the most crucial aspect when going into a performance. How do you get 50 musicians to all agree and come together with enough cohesiveness to outmatch a clockwork machine? Well that comes down to direction and a positive community. As Priya Dutkeiwicz, a junior and a section leader in the band said, “We are kind of like a big community in a way, but it’s a very chaotic one.” Everyone in the band has their own problems going on, their own stories to tell, and yet, for that split five minutes where they are playing a piece all of the problems fall away and only this magical, flowing sound remains.

This definitely has something to do with the type of people that join high school bands. The drum major of the band, Juliana Houge, agreed with Priya, “When we get into groups, all of us [musicians] want us all to succeed, and we just try to go to that in our own way.” As an individual, trying to be as devoted and passionate as you can doesn’t improve the whole sound of the band, but through caring about the little things, those musicians can elevate the passion of other students.

Creating that community doesn’t just fall on the other musicians of the band, it also falls heavy on the director as well. “There is only so much I can do, I wish I could make every kid in the group feel the determination and the urgency. What happens so many times in schools is kids wait until the very last second to turn on and focus, and I feel like if we could just start that process sooner then we would just be even more successful,” Mr.H said. Being a band director comes with more work than just waving your hands frantically in front of a performing band. Mr.H is that force that allows all these young musicians to feel a drive when it comes to music.

This force is not limited with the high school band, one of the leading factors in band growth is the size of the band, and if you want to have more musicians then you have to recruit more musicians. That sounds simple enough, but the largest barrier of bringing in new musicians is the transfer over from middle school to high school. 8th graders coming up from middle school can shape the sound of the band, and depending on the size of the future terrier band, can greatly fill out the sound of the band. Isaac Pearsons, a freshman, recalled that coming from middle school was a bit of a shock even in the band. From the harder pieces to working on balancing sports and academic life, fitting into the band was hard, but not impossible.

Ever since Mr.H started directing the high school band, the three levels of schools (elementary, middle, and high school) have been working towards a more connected music program. Slowly more and more activities between the bands are starting to spring up. For example, the Music in our Schools Concert, held every year up until covid, was a collection of all three of the bands put on by the three directors so younger students can see what the older bands are working on. The same goes for Step Up Day, where the 8th graders join the high school band in playing for the football team, and it doesn’t stop there. One push on connectivity came from the “band-buddies” activity that the high school band did during covid, pairing a high schooler with one of the 8th graders and talk to them like pen pals, all in an attempt to make the younger kids feel like part of the community and to bridge the divide between ages. More communication between all of the West Springfield bands allows for a greater amount of musicians willing to stick it out through their high school years, and the band is finally starting to see the payoff.

Mr. H recollected about his own first moment with music, “I started on the trumpet, that was the very first instrument I could play and in 3rd grade I picked that [the trumpet] because my neighbor, I lived in an apartment block and my neighbor played the trumpet so I wanted to play trumpet because my neighbor played the trumpet. And that’s usually how these things start, you know somebody and you want to do the thing that that person does, “ Everyone starts somewhere, and whether you are going to be a highly trained musician or some office worker in the future, right now if you show aptitude for music it is Mr.H’s job to make any child with an interest in music into a musician, and fostering that musicianship is not always easy.

”Part of it is growing up and maturing, but another part of it is having a teacher who focuses on the technical parts of music and as you get better at that it’s going to be ingrained into you a little more,” said junior and band section leader, Priya.  This focus on maturing musicians is what makes any band director unique and important, each one has their own style to help their students grow into better musicians. “I think when [Mr.H] needs something done he is very good at verbalizing that,” fellow band member Juliana observed. His students agreed that his affable and easy-going nature makes him easy to talk to and creates an atmosphere of respect and admiration that causes the young musicians to follow him as he directs them on a path of music.

Overall, the band is making vast improvements and over the next five years Mr.H plans on taking his band to brand new and exciting places. As they are preparing to go to a competition on the first of April, getting to show off their skills isn’t the only goal the band has to look forward to as they attempt to get new marching uniforms, replacing the uniforms from 1980. When you have a chance maybe take a minute to listen to the band, after all you might be more impressed then you would expect!